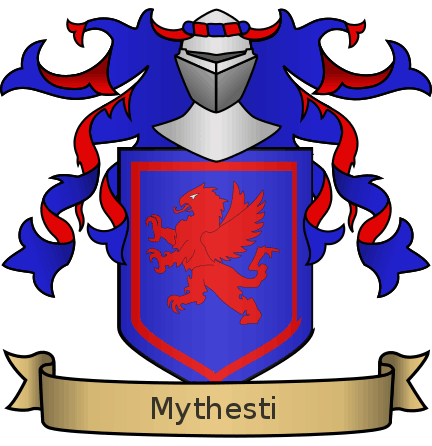 Mythesti is a poor kingdom that has suffered a lot in the past. The land is not particularly fertile, and if the farmers do manage a decent crop, they almost always lose some to insects, hail, or early frosts. There are rumours that the kingdom is cursed, and there is a prophecy that a magically gifted child of the royal family will be the one to bring prosperity to the kingdom.

Their struggles have led Mythesti to attack Evendell on a number of occasions, searching for a share of that kingdom's riches. The hostilities between the two kingdoms ended when Sherrilyn married Henry, an arrangement that came with a large dowry.

Mythesti's army is equally divided into two pursuits - keeping the salt plains safe in order to protect their only truly valuable resource, and quietly trying to steal other resources from Evendell.

Mythesti does not have an assassin's guild of its own, and makes use of Evendell's guild if needed, which is rare.

There are no magic Schools on Mythesti either, though there is a thriving practice of magical apprenticeship. There are a few locations in the kingdom where a few master mages have set up together, similar to a school, but these are informal and quite rare. Mages in Mythesti use a staff to help cast their most powerful spells.

Henry: The only royal child of his generation, he has had a lot of expectations to live up to. Unfortunately, true to the rest of his kingdom, Henry's lot in life has been full of trials and tribulations. His arranged marriage to seal the treaty with Evendell is something he's making the best of.

- Shattered Dreams: a novella included with the Pursuing Victory trilogy