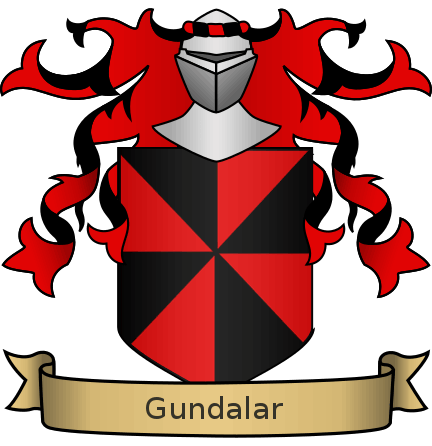 Gundalar occupies the northern part of Obyra, the largest kingdom based on area, though much of it is uninhabitable. The southern border is forested, while the northern stretches of the land are a frozen wasteland.

The citizens of Gundalar keep themselves isolated from the rest of Obyra. Considered barbarians by their southern counterparts, the eight nomadic clans of Gundalar are fierce warriors, men and women alike. They have no formal trade relations with any of the southern kingdoms, though traders do have a tendency to venture north during the summer months.

There is no formal army in Gundalar, with each of the clans responsible for policing and defending itself. All of the clans will defend the year-round citizens of Hampton, if ever required to do so, but they are rarely called upon.

There are no assassin's guilds in the kingdom. Highly honourable, the warriors of the clans settle their differences through ritualized combat, before a gathering of witnesses. Leadership is obtained, and kept, through physical prowess, and anything as cowardly as striking from the shadows would see the assassin quickly removed from the protection of his or her clan.

There are no formal magic Schools in Gundalar, and no formal mages. The only real magic users are the clan shaman, men and women tasked with keeping their clan members safe and forewarned of things like impending storms.

Briac: Shaman of the Storm clan, Briac has a strong Spirit gift, allowing him to see into the future. He quickly aligned himself with Rhys, and helped Rhys obtain a position within the clans.

Mason: A member of the Storm clan, Mason has been in training to become a shaman. His affinity for the weather isn't a Spirit gift, however, as Mason is actually something much rarer - a Storm Caller.

Vaughn: The son of Llew, Rhys' chief rival, he caught Zinerva's eye and the pair have formed a formal relationship, despite Llew's displeasure. Vaughn has been groomed to take over his clan's chieftain position when his father dies, but Rhys has also named Vaughn as his heir, placing the young man in a difficult position.

Zinerva: Rhys' daughter, and a powerful Spirit mage, she has been trained to take over the position of clan shaman from her father. With Vaughn, she has managed to take over the leadership of many of the clansmen who feel that the nomadic way of life is no longer the most suitable for the citizens of Gundalar.

- The Pursuit of Conquest: Book 3 of the Pursuing Victory trilogy

- The Storm Caller: Book 2 of the Guardians of Obyra series